Three experienced glider pilots from Lithuania shall perform a historic flight to mark the Centenary of the Restoration of Lithuania's Independence. They will fly over Lithuania, Poland and Ukraine in engineless gliders. The flight “Gliders Fly from Sea to Sea: Lithuania – Ukraine” is scheduled for the first two weeks of August. It will mark the 100th anniversary of the restoration of Lithuanian statehood, and shall prove that great distances can be covered with gliders.

It is the second time the project participants – experienced glider pilots Algirdas Šimoliūnas (32), Sakalas Uždavinys (56) and Vice-champion of FAI Junior World Gliding Championship Ignas Bitinaitis (21) – will make a long-distance gliding trip, what at first sight seems like an impossible challenge. In the summer of 2016, the three pilots covered 500 kilometres in two days, spent seven hours and thirty minutes in the air and flew over the three Baltic states without stopping in Latvia. They all remember that flight as one of the most challenging and memorable experiences in their lives. The weather conditions were not favourable and the rainy landing in Ridali airfield (Estonia) was especially dangerous.

This time the pilots are taking on an even greater challenge. They plan to cover a distance of 1 800 kilometres – from the Baltic to the Black sea – in engineless gliders. The planned gliding route is through Kartena (LT) – Bialystok (PL) – Lublin (PL) – Rivna (UA) – Vinnytsia (UA) – Odessa (UA). The route Lithuania – Ukraine has been chosen for a reason.

The flight marks the friendship between the neighbouring countries

A. Šimoliūnas – the man behind the idea – says that one of the main goals of the flight to Ukraine over Poland – to mark the common history and friendship of the neighbouring countries. “Lithuania and Ukraine have common history. For 200 years, before the Union of Lublin, our countries shared the land between the Baltic and the Black seas. Nowadays, Lithuania and Ukraine foster good political relations. We aim to celebrate the friendship between the countries and remind that Ukraine is our close neighbour and strong partner,” explains A. Šimoliūnas.

In addition, the pilots want to show that it is possible and it is safe to travel through the NATO airspace in all directions. Often public discussions portray Ukraine as a restricted periphery of Europe, but Ukraine is open and free to access for all Lithuanians and Europeans.

“We want to encourage the pro-European direction expressed by Ukrainians. Also we want to demonstrate that the European Union is a peaceful space, and Ukraine is welcome here,” says a well-known actor and project participant S. Uždavinys on the future flight.

The glider pilots will have four flags – NATO, the EU, Lithuanian and Ukrainian – during the whole flight.

Gliders fly using warm air currents. Gliders are affected by strong winds, which make it more difficult to fly, and can’t fly in the rain. Terrain and climate also have an impact on gliding. A. Šimoliūnas expressed his concern on, most likely, the main challenge of the trip: the glider pilots are not familiar with the Ukrainian terrain and climate, which are different from that at home.

“None of us has glided over Ukraine. We are not familiar with the terrain of this country. Another aspect is that Ukrainian climate is more continental, while Lithuanian – oceanic. It is the biggest challenge to learn as much as possible about Ukraine before the flight, and we will have to negotiate the weather,” says A.  Šimoliūnas.

The most optimistic duration of the flight – five days, but the pilots are planning twelve days for covering the distance in case the weather conditions will be unfavourable.

Pilots will be supported by ground team

The flight is impossible without the support of the ground team. The ground team of three cars will follow the gliders during the whole trip and will help the pilots in cases of unexpected landing. They help to disassemble the gliders, transport them on trailers to a new launching place and ensure the launch. Lithuanian bikers also support the idea and will travel together with the ground team the whole journey.

In addition, one or several Lithuanian pilots will fly with their planes next to gliders over Poland, and will help to launch the gliders if needed. In Ukraine help will be provided by the local pilots.

The flight “Gliders Fly from Sea to Sea: Lithuania – Ukraine” is scheduled for 1-12 August. 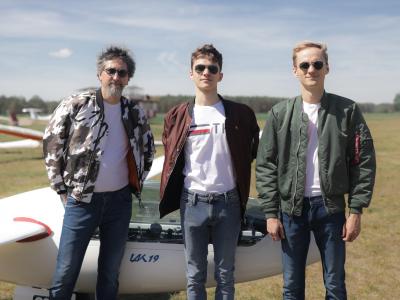 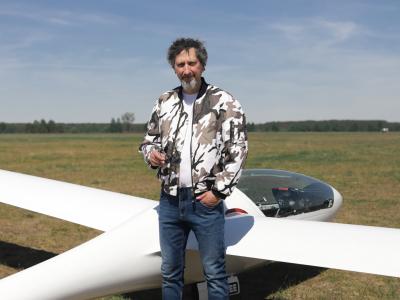 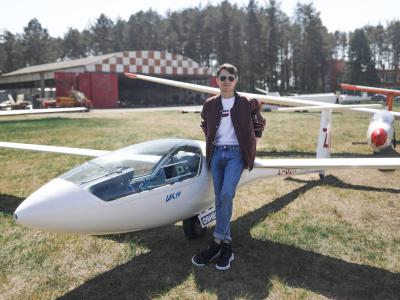 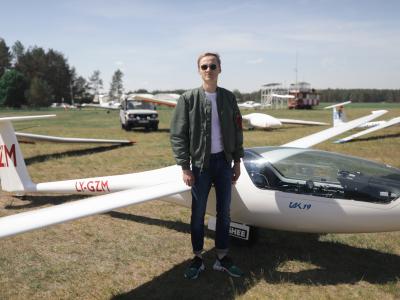 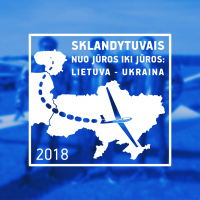